Elgol, on the Isle of Skye, in the Highlands of Scotland. . The single rack road (B8083) leads from Broadford to one of the finest views in Britain at the small cluster of crofts and cottages that make up Elgol. From here you will see a remarkable backdrop of the Cuillin mountains plunging steeply into the Atlantic, one of the finest wilderness locations in the British Isles. 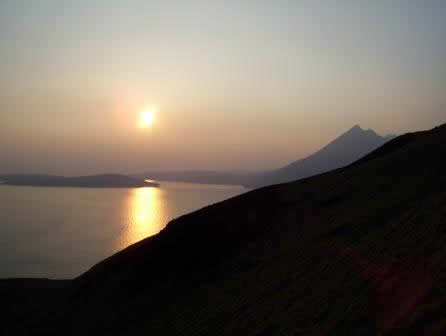 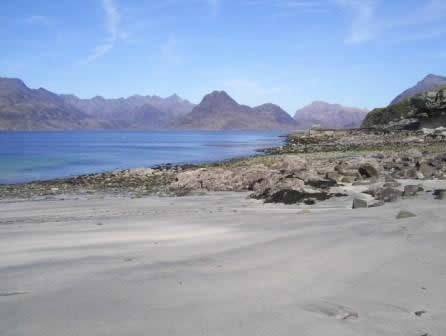 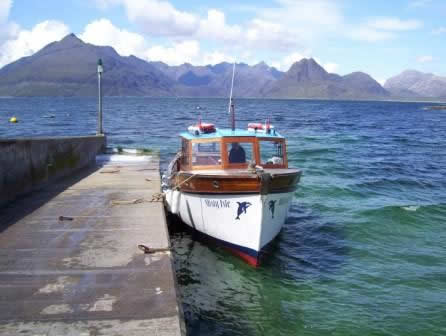 The national press have featured Mary's Cottages as the perfect location for a romantic honeymoon after singer, KT Tunstall, chose us for her honeymoon in September 2008. KT's visit featured in the Sun, Daily Record, Daily Mirror and Daily Star newspapers as well as a host of regional papers including Skye's own West Highland Free Press. 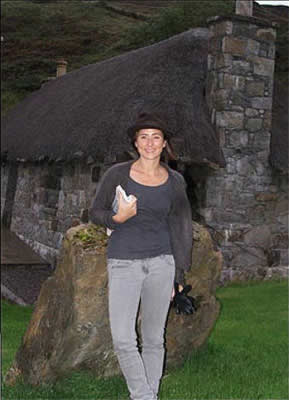 The small crofting township of Elgol is home to almost 100 people. Elgol is situated in the parish of Strath, and these lands were traditionally held by the Clan Mackinnon. Like much of Skye, this area is not only famous for the amazing landscape, a result of an incredible geological history, there is alos much human history to be found in what might otherwise seem to be a virtual wilderness. The Vikings visited and held land on Skye, and recently there have been archaeological finds in the area. Mythology has it that there was a skirmish in Elgol in which the Vikings were defeated, and the story goes that the celtic name Elgol is derived from ‘Weeping Swan’, after the longboat that was burned on the shoreline.

The Mackinnon clan built their ancestral castle on the location of the old clifftop roundhouse (Broch) of Dunringill. Very little evidence of the castle remains, however the remains of the old roundhouse still stand, and the arched entrance still remains intact.


Elgol also boasts the last hiding spot in Scotland for the Jacobite Bonnie Prince Charlie. The Prince escaped, however a ransom of 30,000 GDP (20 million GDP in today's money) was offered for his capture. When on the run as a fugitive he was met by Captain Malcolm Macleod who led him to Elgol and the home of his sister who was married to Captain John MacKinnon, the clan who had long shown staunch allegiance to the Jacobite cause. He then rowed the Prince across the Sound of Sleat to Mallaig for the next stage in his journey to find sanctuary. As an act of gratitude, having lost all his possessions, Bonnie Prince Charlie gave Mackinnon a farewell gift in the form of a precious recipe for his personal 'eau de vie' liqueur, which he carried with him as a medicinal tincture. This secret recipe was preserved by generations of the MacKinnon family, before finally creating at the turn of the 20th century, what would become a world famous liqueur: Drambuie. If you pick up a bottle of Drambuie now you will see the distinctive banner 'Remember the gift of the Prince - Prince Charles Edward's Liqueur.'
The name Mackinnon continues and Seamus Mackinnon who Captains the ‘Misty Isle’, making boat trips from the slipway at Elgol across to Loch Coruisk. Seumas, the local skipper for Misty Isle Boat Trips  is a descendent of John Mackinnon who famously ferried Bonnie Prince Charlie to safety after hiding him in a nearby cave in July 1746. If you visit the cave, be careful to check locally on the state of the tides, as the cave is only accessible at low tide, and you don't want to be stranded!
It would be hard to find a skipper with more knowledge and experience of local conditions. Misty Isle Boat Trips was recently featured in the TV Series Britain’s Favourite view when MP Charles Kennedy sailed with Seaumus across Loch Scavaig from Elgol into the heart of the Cuillin mountains to see Loch Coruisk.


Skye is famous for its local music and culture, and probably the most famous song which mentions the island is 'The Skye Boat Song'. Few, however, realise that there is a direct connection between the Skye Boat Song and Loch Coruisk for it was whilst being rowed along Loch Coruisk on a trip to the Isle of Skye during the 1790s that Miss Annie MacLeod first heard the Gaelic air 'Cuchag nan Craobh' being sung by the rowers. Miss MacLeod wrote down the music as she remembered it and the lyrics were later added by Sir Harold Boulton.
Loch Coruisk is also the scene of one of JMW Turner's paintings, and a focus of the writings of Sir Walter Scott and Boswell and Johnson who were all struck with the beauty of the area while they travelled the Scottish Hebrides. Many have visited Loch Coruisk over the years, especially following the visit of Sir Walter Scott as a result of his famous description of the Loch. 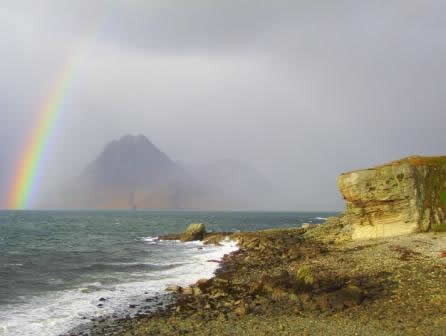 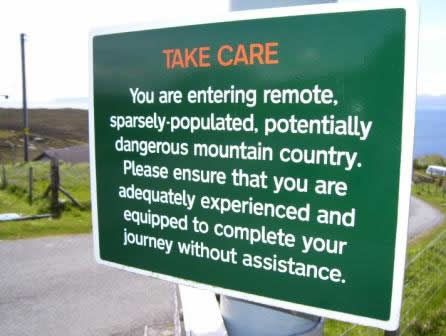 Elgol is on the Isle of Skye, in the Highlands of Scotland. Please click on the links below to find the best holiday accommodation and attractions in the Elgol area, or alternatively click on the links on the right to explore some of the others towns and villages in the the Highlands of Scotland, or the following links to explore the other towns and villages on the Isle of Skye.

We are always updating this page for Elgol, on the Isle of Skye, in the Highlands. If you would like to contribute material or pictures to this, please email us.

In the meantime, please just click on the links below for the full range of holiday accommodation, from high quality hotels near Elgol, to nearby Elgol B&Bs and guest houses. There are also a good range of self-catering cottages around Elgol. There is a wide range of attractions, places to eat andother activitiesto suit all tastes in and around Elgol.

Lovetoescape.com aims to provide a one-stop shop for holiday makers by providing easy an easy to use directory and information portal for all types of holiday accommodation and attractions in the UK. If you would like to advertise your Elgol attraction, Elgol Hotel, Elgol cottage, or B&B in Elgol, please take a look at our advertising options.